Humor in the Workplace is Good

I’m sure you enjoy being around positive, funny people just like we do.  Ever think about how humor can be a business asset?  Here is an interesting article on the subject. 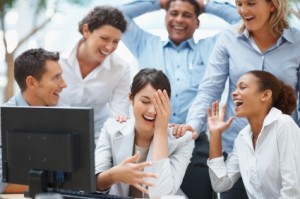 Business colleagues enjoying a laugh on a funny email

“About five years ago I was suffering through an endless business dinner, when the guy next to me said he performed stand-up when not doing IT,” recalls Cody. Intrigued, he decided to take a course and start performing himself. Soon he noticed a happy crossover to his professional life, where he was employing humor more often, listening more intently to clients and becoming better at holding audiences’ attention during presentations.

Cody wanted his employees to reap the business benefits of comedy too, so he launched a 90-minute comedy workshop for his new recruits and staffers to attend every two months. He says it infuses them with confidence, bonds them with coworkers, teaches the nuances of reading an audience and environment, and livens up their presentations. The new refreshed and fun culture is also helping him secure business. “It’s a point of differentiation,” he says. “When all things are equal, clients will pick the firm they want to work with.”

Are funny people more successful in business? Old-school HR people are quick to say that humor is dangerous in the office: It too easily offends or falls flat. However, researchers and companies alike are beginning to tout the individual and company-wide benefits of a well-placed punch line. Those looking for an edge may want to think more critically about their funny bones.

“Humor has three primary impacts: cognitive, emotional and physiological,” says psychologist Steven Sultanoff, Ph.D., former president of the Association for Applied and Therapeutic Humor. He explains that workplace humor may offer some perspective on a situation, which helps people process it. After a company leader sent a memo saying they needed to “shrink” a difficult problem, Sultanoff recalls, one employee posted a tiny copy of the memo on a community bulletin board.

Also, because we can only feel one emotion at a time, humor creates an emotional lift by displacing frustration with the joy of the joke and a physiological reduction of stress hormones.

Sultanoff says that people who are funny likely will be perceived as more enjoyable and as better employees because they are in fact more successful. “If someone is using humor then they are connecting with people and building relationships, which creates opportunities that other people may not have.”

Research shows that successful humor boosts both personal productivity and group effectiveness. According to Michelle Gielan, an expert in positive psychology and cofounder of the Institute for Applied Positive Research, when something makes us smile or laugh, the feel-good chemical dopamine is dropped into our systems, which turns on all the learning centers in the brain and heightens creativity, productivity and engagement.

In a meta-analysis of 225 academic studies, happy employees were found to have 31% higher productivity and 37% higher sales. Doctors who were primed to be positive came to the correct diagnosis 19% faster and more accurately, while business teams solved problems more quickly, were deemed better by bosses and got higher customer satisfaction ratings.

“Humor can serve to facilitate trust, ease tension and establish a sense of group cohesion,” says Anthony Pescosolido, a management and organizational behavior professor at the University of New Hampshire. In his research, he found that effective humor provides a sense of “psychological safety” that helps manage emotions and makes group members more willing to accept challenging goals. Using humor also increases attentiveness and persuasiveness. For a leader, it helps you relate by breaking down power structures and equalizing people in the organization.

Of course, all of this is true for humor that works. Sultanoff says it’s the “empathic humor,” which has a positive intent and arises out of your compassion for a person or situation, that serves people well. Conversely, “hostile humor” undermines productivity and wellbeing. It negatively targets an individual for a misdeed or character flaw. Someone may use it to show their superiority, as a form of passive aggressiveness or as punishment. It’s when you’re late to a meeting, and the boss says, “He’d be late to his own birth,” notes Sultanoff. It causes people to withdraw, feel more irritated and less motivated, and actively avoid others.

Moreover, Sultanoff says potentially offensive humor—anything that may be construed as racist, sexist, ageist or hits upon another cultural sensitivity—could damage your reputation and professional relationships. “Even if someone isn’t offended by it themselves, they might be offended that it’s against the rules,” he says.

At Cody’s Peppercom, employees are quick to police attempts at humor that cross the line. Not long ago, a new male receptionist sent a company-wide email responding to their rained-out softball game. “I was looking forward to seeing the ladies in wet T-shirts,” he wrote. Immediately, both male and female coworkers told him that such comments were inappropriate and unwelcome, says Cody.

But even those skilled at “low-risk” humor should be wary of overkill. “Over-reliance on humor often leads to a sense that this individual is not a ‘serious’ worker, particularly if one tends to use self-deprecating humor,” says Pescosolido. The proverbial “class clown” may be considered a distraction and a barrier to group performance.

Despite the avenues for failure, some companies are betting on humor’s benefits. “Humor and play are in the corporate mission statements of Southwest Airlines, Google and Ben & Jerry’s,” Sultanoff says. “At most places, you won’t read it in the manual, but I think companies should be thinking about it.” He notes that only 15% of people are fired for incompetence—the other 85% are fired for not getting along with others. Used effectively, humor helps people get along, decreases turnover and increases productivity. And that’s no joke.