Fighting Germs in the Workplace

Be careful when you take that mug from the break room, a new study suggests. It may be teeming with germs. 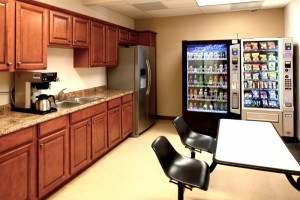 According to a new study led by Dr. Charles Gerba, professor of microbiology at the University of Arizona, and sponsored by consumer product company Kimberly-Clark Professional, the dirtiest place in an office is not the bathroom, but in fact the break room.

The research was undertaken in conjunction with The Healthy Workplace Project, Kimberly-Clark Professional's efforts to help people stop the spread of germs in the workplace. It's worth noting Kimberly-Clark sells disinfecting cleaning products to offices and consumers.

Researchers swabbed 4,800 surfaces in office buildings that had more than 3,000 employees. They tested for levels of adenosine triphosphate (ATP), a molecule present in all animal, vegetable, bacterial, yeast and mold cells. The amount of ATP found on surfaces shows that  objects have been contaminated by cells from any of these sources, the researchers said, suggesting that bacteria and viruses may flourish in these areas.

When the ATP device read 100 or more, the researchers said the object should probably be cleaned. But, if the device read 300 or more, that area was dirty and definitely needed to be sanitized.

What are the top five dirtiest  ares in the office?

Twenty-three percent of water fountain buttons tested received ATP readings of 300 or more, suggesting they are dirty and need to be cleaned, while 53 percent scored 100 or more.

But the water fountain isn't the only drinking surface people should be wary of - the report also found almost half of coffee pots and dispensers received readings of 100 or more, suggesting they could be cleaner.

Disgusted by the old food that's sitting inside the work refrigerator? You might want to be more concerned with the handle. Twenty-six percent of refrigerator door handles were in dire need of cleaning, while 69 percent of them should probably be wiped with some bleach or germ-killing agent sooner rather than later.

"This study demonstrates that contamination is all over the workplace and has the potential to reach people where they eat and prepare food, as well as elsewhere," Brad Reynolds, North American platform leader of The Healthy Workplace Project, said in the press release. "No one can avoid it entirely, but by washing, wiping and sanitizing, employees can reduce their rates of cold, flu and stomach illness by up to 80 percent."

Many office workers are glued to their computers, which has turned keyboards into potential germ cesspools. Twenty-seven percent of keyboards found in offices were "dirty" with ATP readings of 300 or more, while 69 percent could use some cleaning.

Our computer mice and desk phones didn't receive a reprieve either: 51 percent of them should have been cleaner than they were, receiving scores of 100 or more.

Given that this next area is somewhere you'll likely touch before eating, you might want to wash your hands after you reheat last night's leftovers. Forty-eight percent of microwave door handles received ATP readings of 300 or more making them dirty, while 80 percent of the handles had readings of over 100.

"People are aware of the risk of germs in the restroom, but areas like break rooms have not received the same degree of attention," Gerba said in the press release. "This study demonstrates that contamination can be spread throughout the workplace when office workers heat up lunch, make coffee or simply type on their keyboards."

By far, the dirtiest place in the office was the sink faucet found in the break room. Seventy-five percent of them had "officially dirty" readings, while 91 percent of them could be cleaner.

"The break room is really the center of germ transfer in the office rather than the individual cubicle," Gerba told MSNBC. "Everything is shared in the break room."

He pointed out that the sponge that many employees use to clean their mug may be loaded with E.coli. "So you're really wiping your mug with E. coli," he said.